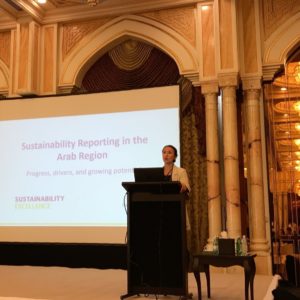 The Global Reporting Initiative (GRI) held a regional launch of the new GRI Sustainability Reporting Standards in Abu Dhabi on the 19th of September 2017. Attended by companies, government entities and NGO’s from across the region, the launch event was a call to action for organisations to start disclosing their sustainability performance.

During the event, organisations that attended gained an in-depth understanding of the importance of sustainability reporting and how to use the new standards. GRI also announced that it received sponsorship from Zamzam Society for Charitable and Voluntary Health Services and from the Saad and Abdul Aziz Al-Mousa Endowment to translate the new standards into Arabic in 2018.

Attending the event from the GRI and presenting the new GRI Standards was Juliette Gaussem, Stakeholder Relations Manager for the region. She said: “The GRI Standards Launch event in Abu Dhabi was a great opportunity to connect experienced and first-time reporters, as well as pioneers of the new standards, in a way that will increase the number of companies disclosing their sustainability performance across the region.”

“It is also fully aligned with the UAE’s national strategy to encourage the private sector to demonstrate greater accountability, transparency and a culture of community responsibility through the mandatory adoption of CSR initiatives. I’m confident that the flexibility and responsiveness of the new GRI Standards will help many organisations in the region achieve a higher standard of sustainability reporting.”

After presenting the main regional trends in sustainability reporting, Darin Rovere, Founder and CEO of Sustainability Excellence, moderated a panel discussion focused on how the GRI Standards could help inspire a new wave of sustainability reporting. He said: “Companies are experiencing more and more requests for sustainability information from rating agencies, investors, regulators, clients and even the public. They are also increasingly expected, along with government entities and civil society, to align with national visions. Digital reporting using the GRI Standards is a great way to better satisfy these requirements. We anticipate leadership companies and organisations will rapidly adopt this approach.”

The event concluded with three parallel workshops moderated by the GRI’s Certified Training Partners for the region. These sessions focused on examples of best practice in GRI reporting in addition to providing a step-by-step guide on how to transition to the new GRI Standards. Attendees were also provided with insight on how to deliver award winning reports.

GRI is an international independent organization that has pioneered corporate sustainability reporting since 1997. www.GlobalReporting.org

Masdar is a commercially driven renewable energy company based in Abu Dhabi, United Arab Emirates and is a subsidiary of the Mubadala Development Company. www.masdar.ae

Established as a Public Joint Stock Company in 1982, we are one of the leading domestic banks in the United Arab Emirates and are headquartered in Abu Dhabi. www.unb.com